I Just Like To Talk About Music: ScHoolboy Q “CrasH Talk” Album

Minimalistic Music reviews based on vision, art and appreciation. When you Have such an admiration for music you realize that you can’t really review an album because it’s so many details, It’s about the artist ability to express themselves not so much what we as listeners would like to hear. It’s projects tHat you can listen to 7 years from now and just catcH something you didn’t previously. I’m just letting you know How the music Has made me feel since that’s important too! I just like to talk about music.

This is such a passive, I’ve practiced what I preached, real “N word” album. It’s so diverse with the choice of beats and flows it keeps you interesting and looking forward to the next song. It’s his fifth studio album gifted to us. No matter what beat Q decides to rap over he never loses his sense of style, how can I explain it? Out of all the flows, the beats, the topics he doesn’t lose himself within it all it balances out just right. I found myself saying “TALK TO US Q!!” while listening to it. Q just makes a certain kind of music that is linear to vernacular of.

Feelings/Interpretation: An intro, “CrasH Talk take one” it gets the subtle ignorance peculating

Feelings/Interpretation: This is no fairy tale this is real life, a true interpretation of what goes on in the life of those who can relate to the lifestyle. Q should come out with authentic hood-sery rhymes. That would go up on the cardboard and all that to go with this song/project make sure it’s limited edition tour merch or something or the sort.

Fave Line(s): “The homies tell me I’m a burden but never threw me a rope
They left me hanging on the corner, my whole life is my stash
One more strike, I’m with the lifers, split the fifty in half”

Feelings/Interpretation: This is one of my favorite songs right now and I find myself saying “TWO DOOR COUPE HOPPING OUT LIKE JACK N THE BOX…” for utterly no reason. It’s such a straight forward egotistical song to me to let people realize. “I’m really the shit, I see right there you, fuck with me… if you want to you.” I myself like “cocky” energy as such, it just gasses you up, the affirmations you sometimes need. It being a fast pace song with such a steady flow feeds the spirit also and he says so much it’s really like “did you just hear that man” AND THE VIDEO WAS SO NOSTALGIC featuring faces such as Smac and Tyler The Creator.

Feelings/Interpretation: Do you guys hear that piano? This is really a classical song. I believe this is representation of “a drunk man tells no tales” while just releasing how he feels since it’s such a subtle honest song. My favorite part personally is 3:08 as the song fades out I really appreciate the sound of this song, it’s beautiful. I can imagine a if I was in my mid 30s with a piano in my living room I’d be laying on it while this plays chilling, with a wine glass in my hand. It’s a song of elegance nonetheless.

Fave Line(s): “You a cutie and lookin’ purty and perfect”

Feelings/Interpretation: I think I like this song because it’s linear to ‘Rock Creek Park’ by the Blackbyrds so it’s pretty comforting in a sense. On top of Q really dropping knowledge the way the beat is set up it’s like a sprinkle of “you don’t hear me tho”

Fave Line(s): “You ain’t talkin’ ’bout no bread or no guap or no fetti or no cake
Get the fuck up out my face, what you say?”

Feelings/Interpretation: I said “As long as he has a feature with 21” before we got a chance to see the track list. I knew when I saw the feature it was going to be such an element.

Fave Line(s): “Fall in this bitch, transfusion with the drip drop
Sauce everywhere and got broccoli in my Ziploc
Tatted on my face, no role model, that’s for Kid Bops
Got it on my waist, let that shit rock, I’m floating”

Feelings/Interpretation: It’s ironic that this song is after floating because that’s how it makes you feel. You zone out and ride the sounds while also vibing to the content.

Fave Line(s): “Can’t get high enough to get over the hump,

how many friends around helping me lose, how many excuses until I’m excused”

Feelings/Interpretation: A CELEBRATORY VICTORY SONG It makes me feel so good and successful as it prepares me to do it right when I get to where I wanna be and how I’m thankful my mother raised to be a respectable youngin’.

Fave Line(s): “Can’t write the script when this real life
Rich, still dodgin’ that bus ride
From the west side where don’t shit slide, we on trip time”

Honorable mention – “So, girl, be proud that your skin black
And be happy, girl, that your hair napped
‘Cause the school system won’t teach that” Only because even though I’m not his daughter, obviously, it’s still very pleasing to hear because I can also relate to it.

Feelings/Interpretation: “I got that WAH-TAH member??” s/o to the little lady that went viral on twitter. She is pure visual representation of how you enjoy this song.

Honorable mention – “You can just hit me when you with your dude
Whenever you see me, I be with them goons
We ain’t gon’ fix ’em but we got ’em tools”

Feelings/Interpretation: The homie enjoying the fruits of his trials and tribulations and it makes me proud he surpassed the story he told from beginning to end so I’m happy he’s able to enjoy himself along with give us precious content. It’s a good way to close the project.

Fave Line(s): “Death on my block, ain’t worried
Glide through the air, ain’t cautious,
Mind on the ground, ain’t dreamin”

“Period Q!!” is really my reaction to a lot of what he says because I feel like he’s under appreciated but that’s what happens when you’re giving real content it makes people intimated because the fake can’t relate. That’s what the album reminds me of, steady and true always prospers.Along with the fact he gave us a no skip project! I consider this project a like a time capsule. 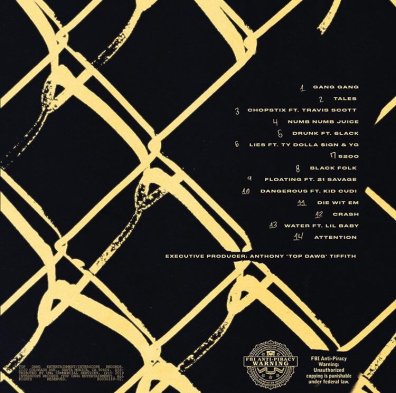 Big Ups to Genius for making it easier to provide the credits of who are always to be incorporated to help influence and appreciate the details that go with the creation of any project.